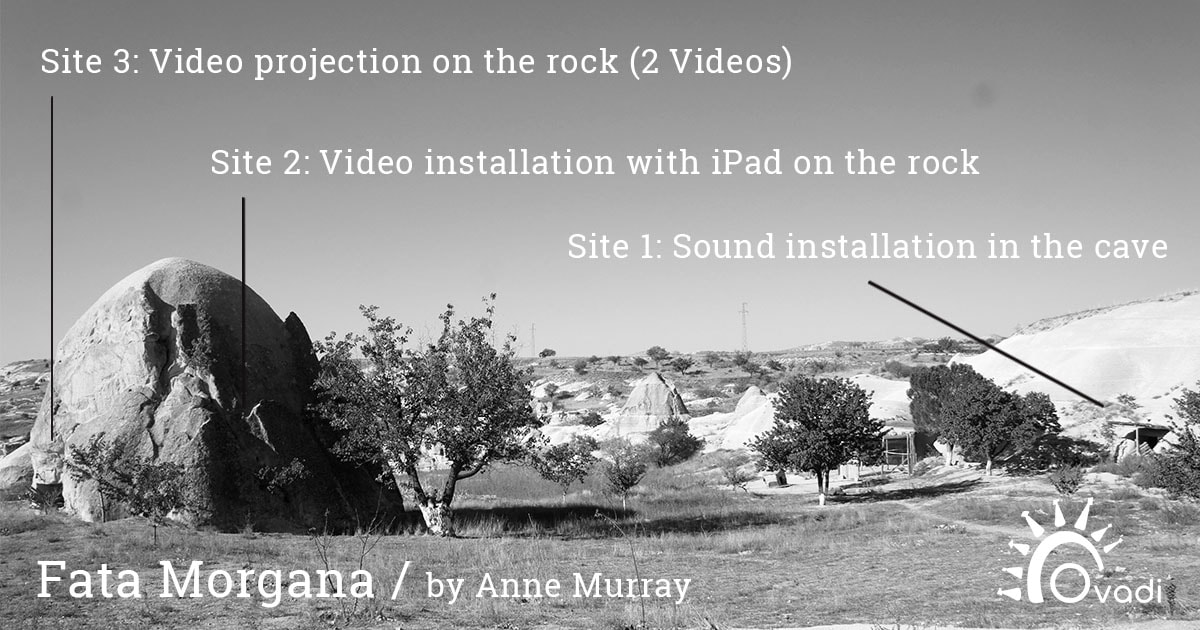 ​The hills remember and the sand speaks, they are always listening. Centuries of sound and light are captured within the rocks, if only we could unleash their memories. Fata Morgana predicts an archaeology of sound, a future of possibilities in unlocking the histories recorded within the rocks and the caves in Cappadocia. Artist Anne Murray projects sounds and images, recorded conversations and abstracted light videos, as well as environmental sounds and poetry across rocks and within caves in the Cappadocia region of Turkey. These private conversations, secret moments will be forever locked into the rocks, leaving a lasting impression, which one day, with new technology, might be seen and heard again by future generations.
These conversations and projections explore the secret and overt instances of the invention of language through sound experiments, with our bodies as instruments and with light and objects as external means of communication. With caves and hills that date back millennia, the sound captured within them could include everything from animal to human, even electronic noise; the artist explores this notion of sounds in a landscape and the possibilities of invention and impression, what one can conjure from the history of a space and leave as impression, which the rocks could witness for future generations to mine.
"Inside a cave in Cappadocia, this sound installation conveyed my thoughts and the rock spoke back to me in its own language. As a conversation in philosophy, I searched for answers in the darkness and in secret. Visitors experienced this work on site in complete darkness on a night with a full moon shining outside the doorway." Anne Murray
​
Fata Morgana is a mirage, seen from the perspective of a rock in Cappadocia, Turkey. The rock as a witness to the movement of an insect questions its own memories confusing present, past, and future, it is in a dream space.
A Stone in Love addresses the incongruity of experience between the stone and the frog. One realizes the differences in movement and life experience of the frog, moving, climbing, leaping, while the stone moves and changes at a pace that is almost imperceptible. The stone falls in love with what it perceives are the qualities of the frog, but are in fact just the inherent features of its body and its potential for movement. The song is a haunting lament.

​
Be a rock was a performance orchestrated and conceived by artist Anne Murray in Cappadocia with participation in the performance by artist Gözde Kirksekiz. Each artist imagined themselves as a rock moving slowly and experiencing time and space in a new set of axioms relating to subliminal sequences in the landscape.
Fata Morgana and Francis is a part of a series of video and sound experiences connecting spaces, ideas, and languages. It reconsiders the connections we face outside of time, in a zone one might call eternity. Here, the grotto of Saint Francis, travels to a cave monastery from the Byzantine period. It carries with it the Ilex trees and the songs of the birds inhabiting them to share in the grotto of another monk in ancient Anatolia. With video and sound projections, one can achieve an infinite connectedness, a timeless intervention into perception and contemplation in this reflective zone of an ancient rock monastery.